GLP-1 is a multifaceted substance !

If it’s produced by Novo Nordisk or Eli Lilly and marketed to treat type 2 diabetes or obesity; as pure crystals it’s one of the most expensive substances on the planet. You only need a milligram or so as daily or weekly injections, but the treatment still comes out at 4-6.000 USD per patient per year

But if its produced in your own gut by L Cells in the intestinal wall,  its both more effective, its natural and its completely  free !.

Even though GLP-1 has been available for patients for approximately 10 years, due to its high price, its still only just beginning to really catch on as a regular treatment. Its asserted that it’s so effective and versatile that for every one patient that receives the treatment, at least a hundred more could benefit.

So what does it do ?

GLP-1 is a hormone that stimulates insulin production, which for type 2 diabetics, is very important as these patients due to an autoimmune response are becoming unresponsive to insulin.

It also reduces appetite, both due to a hormonal signal to the parasympathetic system, and because it causes the stomach to empty more slowly creating a sensation of fullness, thus regulating the flow of digestion to be more gradual.

Finally it signals to the liver to lower it’s release of glucose into the bloodstream.

The result is that it causes the blood sugar to become regular and lower, which again causes the required insulin in the body to become less.

So in total that is magic for a type 2 diabetic:

We humans  produce GLP-1 in the L-cells in the intestinal wall. These cells respond to short chained fatty acid (SCFA) which is produced by the bacteria in the gut in particular when they ferment the soluble fibers.

Boosting soluble fibers in your food means boosting prevotella bacteria in your gut. (which as we learned can be achieved by eating lots of vegetables)

For those of us not suffering from diabetes but only wishing to stay healthy and avoid overweight, a natural GLP-1 boost is also very desirable.

GLP-1 will in addition to fending of type 2 diabetes, reduce your appetite and help you stay slim. It’s a very effective substance for fending off heart decease  and it’s expected to also be effective for treating NASH,  (non alcoholic fatty liver decease) which is a contributing factor for early death, non treatable today and which approximately 5% of Americans suffer from.

Maybe a little surprising it is now being tested in a very large survey in the UK for its effectiveness to arrest and perhaps even treat  Alzheimer.

Extract: By boosting ones own GLP-1 production on may very likely avoid:

If one does it by boosting vegetable intake to 800 g / day it will also lower cancer risk and all cause mortality substantially.

I think taken together it makes a pretty convincing case for the soluble fiber smoothie.

A recently published meta study in “International Journal of Epidemiology” involving 2 m people, concluded that a daily intake of up to 800 grams of fruit and vegetable was associated with reduced risk of cardiovascular disease, cancer and all-cause mortality.

These results support public health recommendations to increase fruit and vegetable intake to 800 grams on average per day.

800 grams!, – that’s a lot,-  and much more than most of us eat daily. To be honest I have never been close to this amount of vegetables,- that is before I started using a blender.

In my video I demonstrate how its easy to make the smoothie in less than 5 minutes .

The smoothie is designed to be equally healthy and tasty, while at the same time easy to make. If it isn’t all 3 things it will not be easy to keep it up as a daily routine.  This recipe works for me and the routine of making it and consuming it is almost like brewing and drinking morning coffee.

It needs to be simple and tasty, because it helps me keep the microbiata changed to contain 50% prevotella, and therefor it has to be kept going at a steady interval,- for the rest of my life.

The reason why it is worth the bother is that the smoothie regulates appetite and basically makes it easy not to put on weight and also if needed to stick to a diet. It also makes it possible not to regain weight after the diet is successfully completed.

The prevotella and the smoothie achieves this by boosting your production of GLP-1 and PYY hormones that reduce appetite, and suppress others that increase appetite. More about this later.. 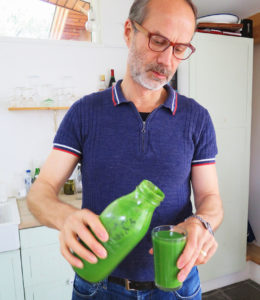