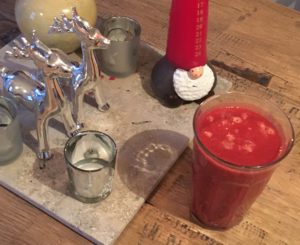 A recent study from Copenhagen university published in Nature showed how people with- and without prevotella bacteria in their intestinal microbiome react to an altered diet with increased vegetables and fibers. All the 60 participants were overweight and all changed from traditional Danish food to “New Nordic Diet” with increased vegetables and wholegrain but no calorie restriction. After 6 months those with prevotella bacteria had lost on average 3,5 kg’s. Those with less than 1% prevotella had lost significantly less if anything. Only 3 persons or 10% of the non prevotella group had changed microbiome profile towards having more prevotella bacteria during the experiment.

The conclusion was that people without prevotella should not use a diet with increased fibers and vegetables for losing weight and also they should not expect to gain prevotella bacteria from changing diet.

This left me in a bit of a predicament, since I in this blog advise people to increase vegetable intake with the smoothie routine in order to change microbiome and loose weight. There is still plenty of evidence to support the claim of increased vegetable intake will support your health, but now it was strongly suggested that only those who have already prevotella would benefit through the mechanisms of the microbiome.

Could this really be that simple and what about those who had already reaped the results and lost significant weight, as well as type 2 diabetics who use the routine with great success to reduce their pre-prandial bloodsugar level.

It turned out I was not the only one who felt that the articles conclusions went too far.

Quite a few influential scientists in the field went out to criticize the conclusion and the way the experiment was set up.

However in general we were left with a picture of the complexity of  microbial mechanism which, I have to admit, have been promulgated by the more influential scientific writers all along.

Relating to this recent study, what is undeniable, – is the clear demonstration that people with prevotella do lose significant weight when put on a diet,- without restriction of calories,- but rich in vegetables and fibers.

That only 10% of the non prevotella group would change profile towards more prevotella is surprising and its particular this part of the finding which is being questioned.

The existing microbiome containing primarily bacteroides certainly reacts and short chain fatty acids are produced and  stimulate the intestinal wall to produce hunger reducing hormones like GLP-1 and PYY, – but maybe not to the same effect than if we had had a microbiome from the onstart consisting of 50% prevotella like the African children.

But over a longer period the microbiome will adapt itself to an increased fibre intake and as a consequence will contain increasingly more prevotella.

In the study 10% of the participants who had 0 or less than 1% prevotella developed an above 5% content over 6 months. In the smoothie routine we increase the soluble fiber intake to the double of those in the study and given time eg. 2 years years in stead of 6 months, most will obtain significant effect and will have changed the microbiome in a meaningful fashion.

After 2 years I myself suddenly without other factors changed, lost an additional 2 Kg’s within a month.

The long term perspective emphasizes that the smoothie routine need to be pleasant and easy to follow.

Luckily for me it is exactly that, – and this brings me to my Christmas smoothie which consists of :

This smoothie should get you safely through the cold season.