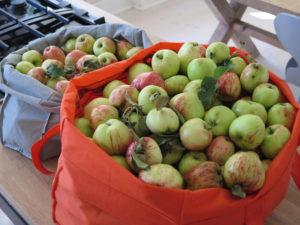 My own reflection and experience with the boost of vegetable intake and subsequent change of the profile of gut bacteria, have made me aware that the diminishing appetite is also accompanied with a change in my general psychic state, towards less anxiety.

Reflecting on this effect I found that for me personally hunger and unconscious fear are intimately connected. I think that it is not so strange that the organism may generate fear as a response to hunger, since for millions of years hunger has been the greatest threat to existence.

If one can accept this, then one can perhaps also accept that the absence of hunger may have a profound effect on the level of anxiety,- that one carries around.

There is a lot of evidence that the psyche and eating is closely linked and often is a great individual challenge. There are today 30 million Americans with eating disorders  and it is asserted that approximately 10% of westerners will be affected by an eating disorder at one point of their life.

I’ve never myself been diagnosed with an eating disorder but I did  physically feel terribly inadequate as a teenager. I responded by engaging in sports to the extend that for certain periods in my life one might  consider it a mild case of training disorder.  I lost weight and accompanied with this felt much better. When for periods I stopped training due to injuries etc. I quickly regained the lost weight, – and felt terrible.

We talk about eating to feel happy and  as a reaction to diminish stressful emotions, anxiety and sorrow. Some  abstain from food to regain a feeling of control of their life or to gain strength in circumstances that seems threatening. We can probably all relate to at feeling of guilt when we overeat and perhaps even depression with our physical appearance or condition. Finally we see how obese people including children, are traumatized by the surroundings reaction to their condition.

Bottom line for me is that one of the greatest benefits of obtaining relief from excessive appetite e.g. through using the healthy smoothie routine, is the tranquility and absence of anxiety which one may experience.

My own experience was that I was able to sleep better, and my general state was improved with diminished anxiety and stress.

4 scientific testimonies of the gut bacteria’s and GLP-1 hormone’s, effect on the parasympathetic system and the psyche:

8,688 Replies to “The close link between eating and the psyche.”